October is Filipino American History Month, which celebrates the past, present, and future of Filipino-Americans. It’s been celebrated since the late 1980s and was set during this month because the earliest recorded proof of Filipinos entering what would become the United States took place in October of 1587. California and Hawaii now have large Filipino populations and communities have sprung up like Historic Filipinotown (also known as P-Town) in the Echo Park/Silverlake area of Los Angeles.

I was actually in Silverlake last week for a job interview and decided to stop by the nation’s largest Filipino American mural, “Gintong Kasaysayan, Gintong Pamana (Filipino Americans: A Glorious History, A Golden Legacy)” located in the small Unidad Park. I’ve actually been to this place multiple times since I was involved in a few Filipino organizations at UCLA, but it’s been recently renovated with new images being added to represent the more modern era. I also once organized a trip open to all UCLA students that included us visiting the mural to learn a little bit more about Filipino and Filipino-American history. The mural was created by Eliseo Art Silva in 1995 and is one of Historic Filipinotown’s key landmarks.

As you go along from the left side of the mural to the right, you see important people and historical events that influenced the lives of Filipinos and Filipino Americans, past and present. A large span of time is covered, showcasing our common legacy. Here are some of the key figures and images that you can expect to find: 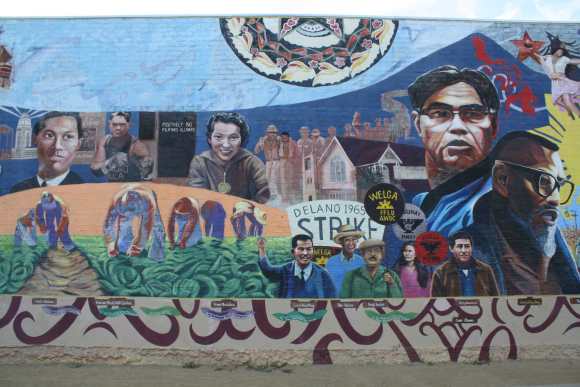 Of course, there are many more things that I didn’t mention so it really is worth going to check out this amazing piece of art in person. It’ll be interesting to see what else the mural will end up depicting in the future.

Join in the Discussion! Cancel reply